Centerville...where YOU make the difference!

Welcome to the community page for the city of Centerville, South Dakota.  On this page you can find all the information on Centerville news, events, businesses, recreational opportunities and more.  We are proud of our little city on the prairie and we invite you to exlore this website and find out why.  Centerville...where YOU make a difference!

Whats Happening in the Community

Your Town Is A Treasure:  Perspective, From An Outsiders Visit To Centerville

The following correspondence is taken with permission, from a recent email that I received. It was so well written and such a nice complement to our community, I had to share. For a moment I found myself lost in the conversation, as if I were taken back to the good ol’ days, when people would take the time to travel off the beaten path and tell of their stops and experiences by mailing hand written postcards to their loved ones, direct from the places they had visited. That type of nostalgia sounds pretty good right about now, doesn’t it?

For videos of our bike path on our Parks & Recreation Page

Featured Home For Sale in Centerville

Click the link below to see the Centerville Development Corporations latest spec home that is currently for sale!

This home located in a great neighborhood features 1200 square feet of living space on the main level and has 2 bedrooms, and 2 baths and includes a master bedroom and bath with a walk-in closet, and main floor laundry.

Centerville Housing Study
Click here to download
Centerville Housing Study Update 2019 Fi[...]
Adobe Acrobat document [474.0 KB]
Centerville has been fortunate to see growth and new housing development over the past few years. Some of it has been organic, but much of it has been strategic growth. On top of the new construction we have seen there has also been homes and properties cleaned up, additions put on, and rehabs done.
Centerville's housing market is currently very strong and trending in the right direction. Property values have increased and demand for more housing opportunities is there.
With housing being a priority, the City of Centerville has now completed its updated Housing Study. Our last housing study was done in 2013 by third party consultant firm Community Partners out of Faribault, MN. Centerville has utilized this group again for the update.
We know that our housing needs and Centerville's housing market in general has changed significantly since the last study was done. This extensively detailed document gives the City of Centerville, the Centerville Development Corporation along with any other potential housing developers, a great amount of data on our market. It helps pave the way for addressing future housing needs and assists in the planning of any potential new housing projects that could be developed.
We are excited to dive into the results of the updated housing study and again have it help guide decision making for future housing projects in Centerville.

If you were in Centerville's downtown at all this summer you probably noticed the start of some eye-appealing improvements. A group passionate about downtown started having conversations about what might be possible in our downtown all the way back in the beginning of 2018 at the Empower Centerville Gathering. This group became a subcommittee of the Centerville Development Corporation and started to go to work.

Seeing the vision for this downtown movement and wanting to contribute, the Development Corporation ultimately decided to commit $30,000 to the project. The first phase got started right before the 4th of July this year and included the brick around the center flower pot at the 4-way stop, the addition of the old fashion street lamps, the new downtown banners, the hanging flower baskets and the new flower pot covers in front of several of the businesses.

And, just last week the group learned that the Development Corporation was successful in the grant application they had written to the Sioux Falls Area Community Foundation for additional dollars towards our Downtown Improvements Project. Members of the Development Corporation were on hand last Thursday to receive a check for an additional $10,000 for Centerville's downtown improvements project.

Some of the other visions for the downtown and next phases will include additional sitting areas and landscaping, decorative fencing, a few trees being planted in the downtown, historic photos being hung along buildings, and bringing back the old fashion drinking water fountain at the 4-way stop.

These additions to Centerville's downtown may seem like small minor improvements. But the group really feels these items will go a long way to bringing some color, vibrancy and life into the downtown, which collectively could have a big impact for Centerville. If nothing else its about creating a sense of pride in place. If we can help create a more appealing environment where people want to start a business and where others want to shop, visit or even just hang out, then the group will have been successful in doing what they set out to do for Centerville and it's downtown.

Remember To License Your Pet

Where to find us! 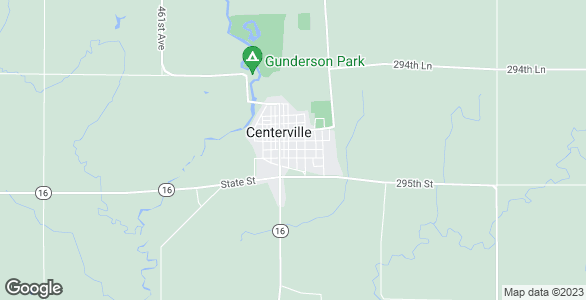 Pay a fee or fine here.